Mr. Sandman, send me a dream, ta da da da…..Seventeen year old Chastity Blake knows the Sandman is just a silly children’s story parents tell their children to get them to sleep. At least she thought it was, until the day a mysterious, light golden sand appeared in her hands during a high school prank that went horribly wrong. A sand that has the power to send anyone it touches into a deep, sound sleep.
Fearing she had lost her mind, Chastity soon discovers the shocking truth of her heritage- she is a Dream Caster. Chastity was never supposed to be raised on the Domain, or what humans call Earth and she is forced to return to her true birth place, Revera – the world of Dreams.
However, in Revera there is no balance between good, the Light Casters, and darkness, the Shadow Casters, and Chastity is caught square in the middle. She soon learns that there is no place for anyone containing both the light and the darkness within them, and the shocking truth that if anyone in Revera ever discovered her shadow self, Chastity would be thrown into the Oblivion – the world of Nightmares.
Dreams are always more than they seem, and this time Chastity is going to discover just how different they can be.
Purchasing links is currently a FREE title on all online stores:
Amazon
Barnes and Noble
Ibooks
Kobo
Google Play 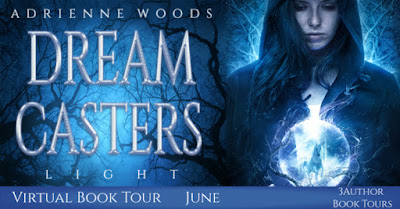 Description: Chastity Blake discovered the hard way what she was: a modern-day Sandman. But things aren’t looking up for Chastity. She is guarding a secret deep within her — her dark sand, or what Reverians call her Shadow. Shadow Casters are known for their dark dreams, the nightmares they create. If she’s caught with dark sand, she may be subjected to harsh interrogation, even banished to the Oblivion with the other Shadow Casters… and that is SO not on her list.

Will she be able to hide her darkness from the most powerful Somnium alive? How long can she outrace her destiny before true nature catches up with her?
Shadow Casters is the follow-up of bestselling author Adrienne Woods’ second series, Dream Casters.

Adrienne is a USA Today bestselling author living in South Africa, where she writes full time. Firebolt, book one of the wildly popular Dragonian series, was her debut novel. Her second series, Dream Casters, will conclude with book three, Millue, to be released in 2019.
FOR MORE INFORMATION
www.adriennewoodsbooks.com
www.facebook.com/AdrienneIsa
www.twitter.com/erichb3
www.instagram.com/authoradriennewoods
www.bookbub.com/authors/adrienne-woods
www.amazon.com/Adrienne-Woods
Dream Casters Light is also available on Audio:

Dream Casters Light is also available in audio, the other parts will go into production in 2019 and 2020.
It’s narrated by the talented Vanessa Moyen, giving you hours of listening entertainment.
Listen to a sample Now!

Read My Books on Amazon!